A few days ago, I received a shocking email from my dear friend Burning Man campmate, art teacher Ann Clark.

You may remember Annie from the Plastic Footprint Project that she organized with her students to bring awareness to the problems of plastic pollution through art.  After retiring from teaching, Annie made several trips to Haiti, first to help build a school and next, to do art therapy with abused/neglected children.  During her stay, she became aware of the huge problem of plastic waste in that country.

This month, she returned to Haiti to continue her art therapy work and also help solve the plastic pollution problem.  We had a great Skype chat all about her plans, and she sent me lots of pictures to share on this blog from previous trips.  But life intervened, and I hadn’t had time to post those pictures and tell you about her latest project.  Then, a few nights ago, I received some very sad news.  After arriving in Haiti earlier this month, Annie and her team were ambushed on the road.  Annie was left badly injured and the driver killed.

I still want to share Annie’s amazing pictures with you and tell you the full story.  But if you would rather skip down to the part about all the ways you can help, please click here.

In 2015, Annie went to Haiti to help build a school in the town of Julie through the organization BuildOn. 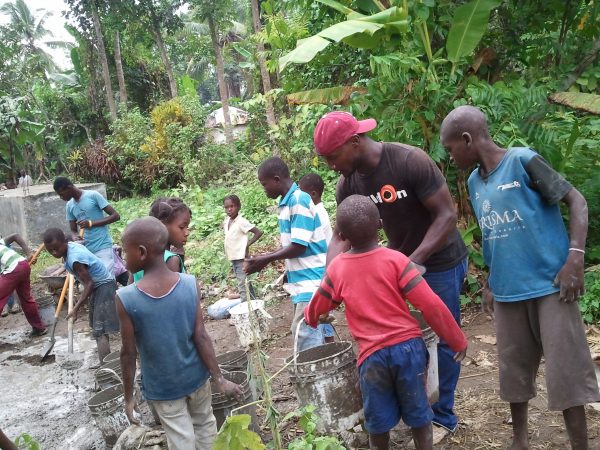 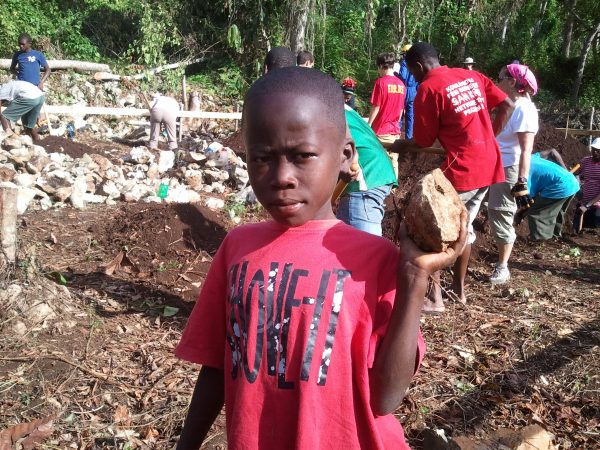 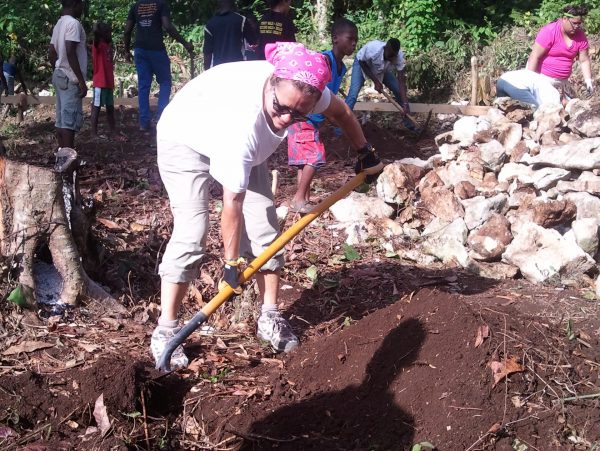 The Haitian community was so excited to get a school in their town! (I wished my American students were so excited to have a school!)  Previously children in Julie had to walk 2 hours each way, up and down mountains to get to and from school. As you can imagine, most did not go.  We built that school with the understanding that education can cure poverty. We worked hard, cleared rocks, dug trenches, made and hauled cement, hauled rocks and started the footings. We worked side by side every day with Haitians of all ages, from 5 to 85….

The community members completed the school after we left. School started last September [2015]!

While she was there, Annie met Morgan Wienberg, founder of the organization Little Footprints, Big Steps, whose mission is to aid in rescuing children from situations of abuse, slavery, homelessness or severe neglect in Haiti.  Annie wrote:

[Morgan] was the valedictorian of her class in a small town in Canada, and, at 18, went to work at an orphanage in Haiti. She found out how corrupt this and several orphanages were in Haiti and knew she had to do something to help the children. She found funding and created 2 Safehouses in the town of Les Cayes. Her story is profound. Morgan has received prestigious awards for her work and a documentary is being made about her. She is now 25.

In 2016, Annie went to Les Cayes to bring much-needed supplies and contribute her skills in art, art therapy, French literacy, and environmental awareness to the students at Morgan’s safehouse.  Together, they created a beautiful mural. 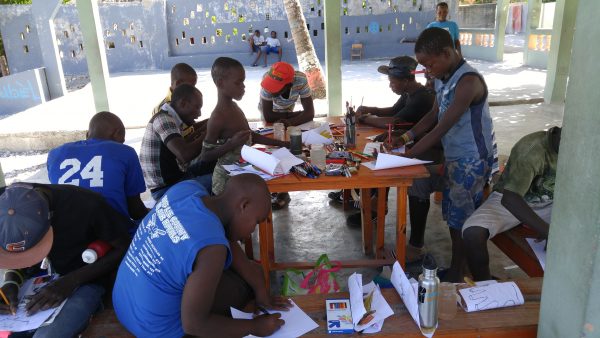 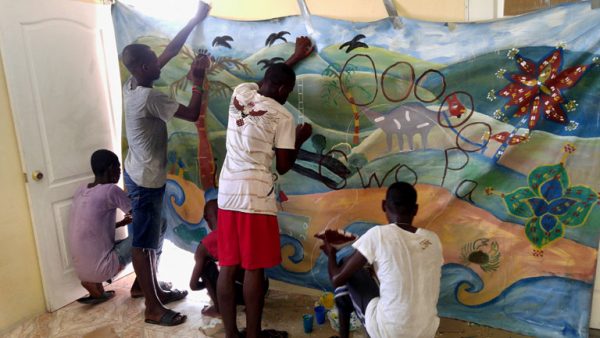 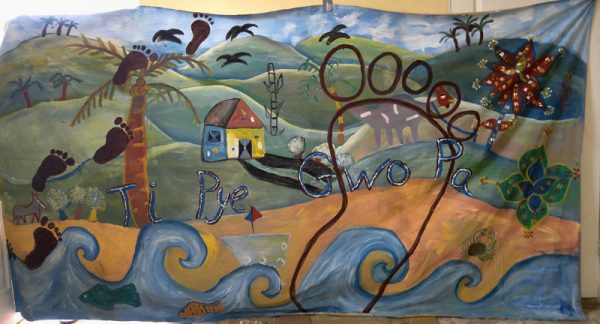 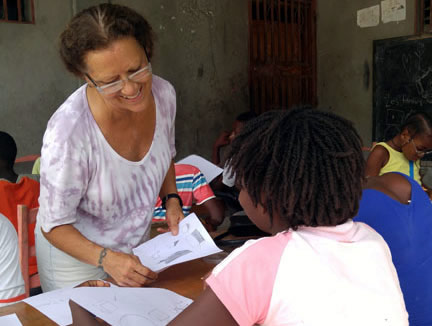 Les Cayes has beautiful beaches, but Annie couldn’t help but notice that each day, the seaweed would wash up entangled with all kinds of plastic trash, from small things like plastic bottles to larger things like a dolls head, car bumper, half a TV.  She enlisted the help of a local colleague to teach lessons on the 3 R’s and organized beach cleanups, making a contest to see who could collect the most trash. 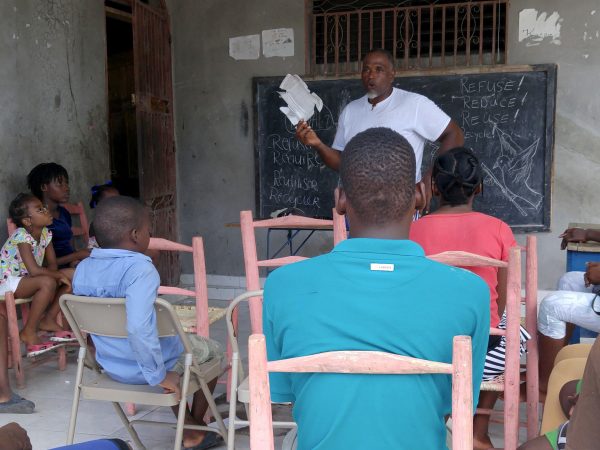 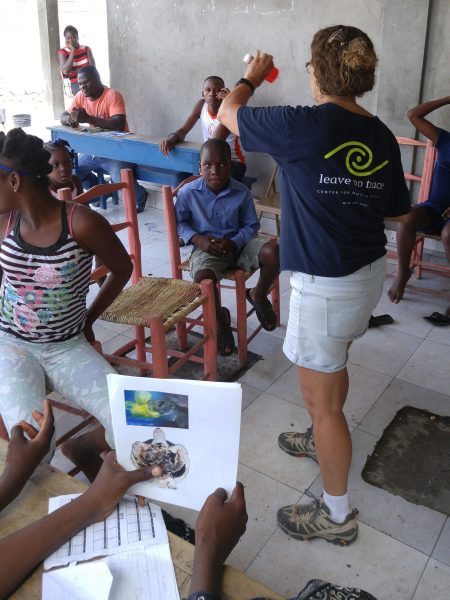 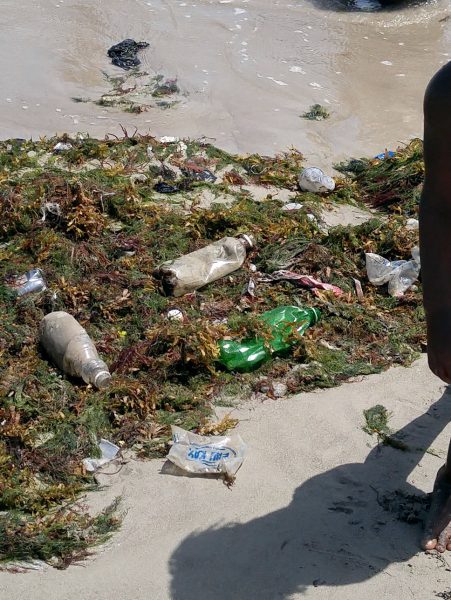 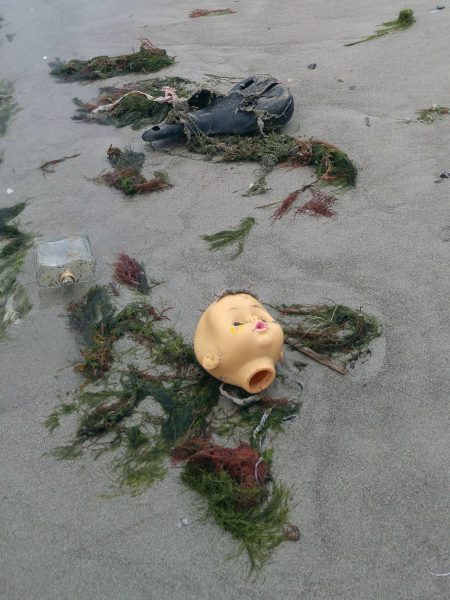 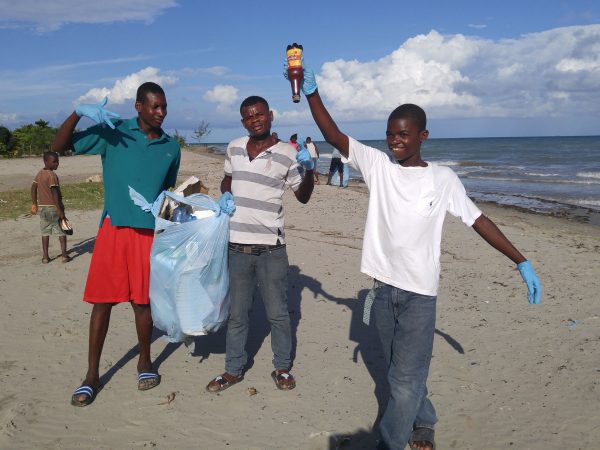 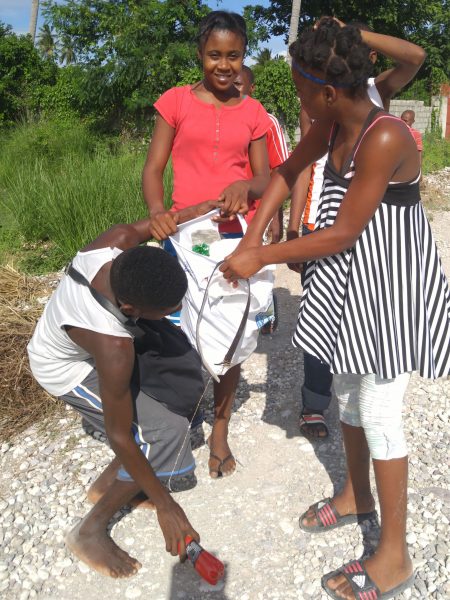 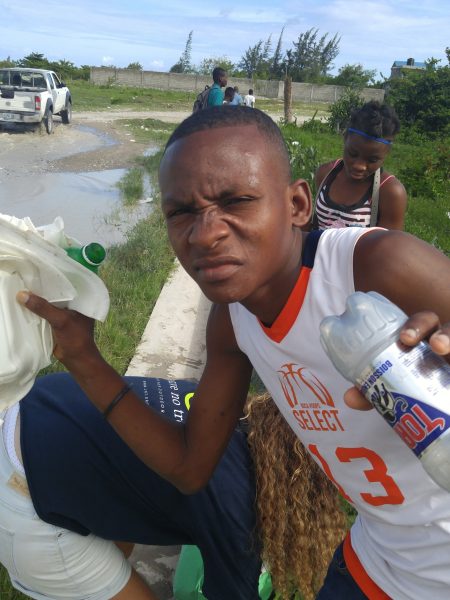 They collected several bags of plastic trash but then realized that there was no infrastructure to deal with it.  The ground is covered with plastic that is simply tossed, and while there are some recycling services in the large city of Port Au Prince, most of the trash that does get picked up gets burned. 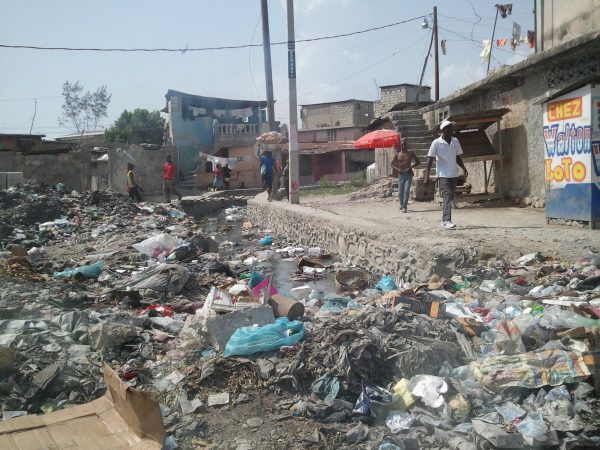 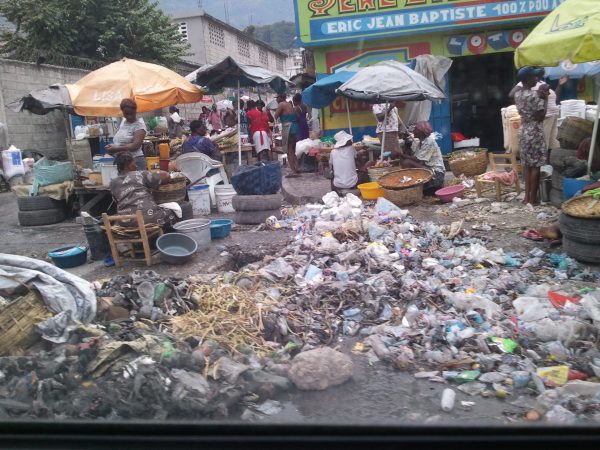 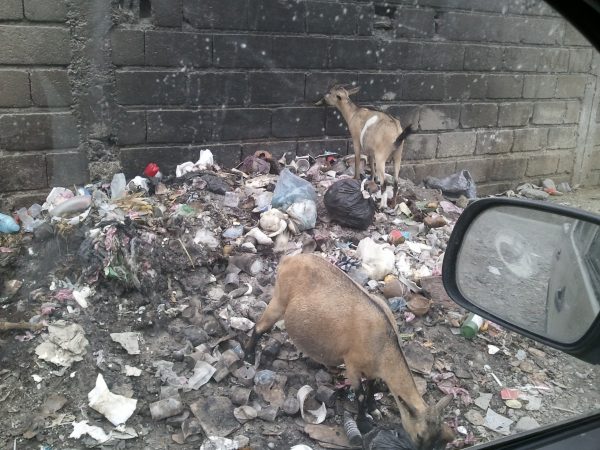 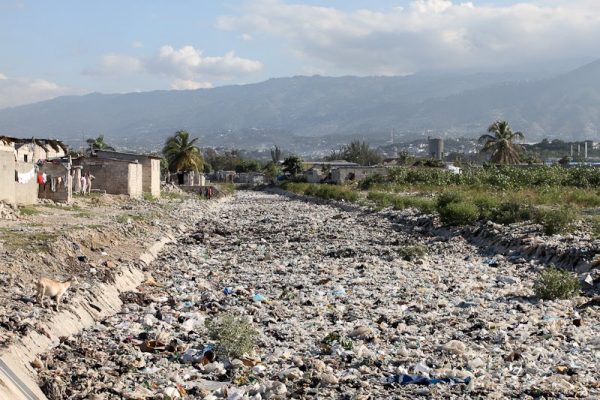 After witnessing the scope of the plastic trash problem in Haiti, Annie decided to return again this year to work with the Plastic Ocean Project to give presentations and raise awareness of the issue and also to gauge interest in a program that would pay individuals to collect plastic trash and turn it into fuel.  The plastic to fuel recycling process was developed by Renewlogy, an organization founded at MIT in 2011, to reverse plastic back into its basic molecular structure and convert non-recycled plastic waste into high-value fuels.  According to Renewlogy, the process is sustainable, resulting in low-sulfur fuel, high energy payback, and zero toxic emissions.

Of course, refusing disposable plastic is the best way to reduce the amount of waste we produce.  But educating individuals to reduce their personal trash is not going to solve the immediate problems of communities in the developing world that are virtually drowning in trash.

The Plastic Ocean Project recognizes this reality and at the University of North Carolina Wilmington has studied the fuel created by the depolymerization process and found it to be very high quality with few impurities.  POP is currently fundraising to get a portable plastic to fuel converter to the Haitian people as a means to clean up the island and provide clean fuel that otherwise has to be imported.

Attacked on the Road

On Sunday, March 4, the POP team (3 Haitian men and 2 American women) got a late start heading for Hinche, the first stop of their tour.  About midway during the drive north, they heard gunshots and someone shouting for them to pull over.  The driver knew that it would be more dangerous to pull over than to try and get away, so he sped up. He got shot in the shoulder and told the passengers to bend down to stay out of bullet range. They then witnessed him get shot in the head and die.  The car veered out of control and they were airborne, heading off a small cliff.  Annie said:

In fear and shock I hugged my pillow and prayed. I remember telling myself it was not my time to die and then I lost consciousness.  That’s all I remember…until I found myself holding my bloody head. I still don’t know who carried us up that cliff with our suitcases (no backpacks, money or phones, all valuables were stolen) and drove us to the closest hospital. There I got stitches in my head and watched them mix up plaster to form a plaster support for my broken leg. The others got stitches and bandages too. 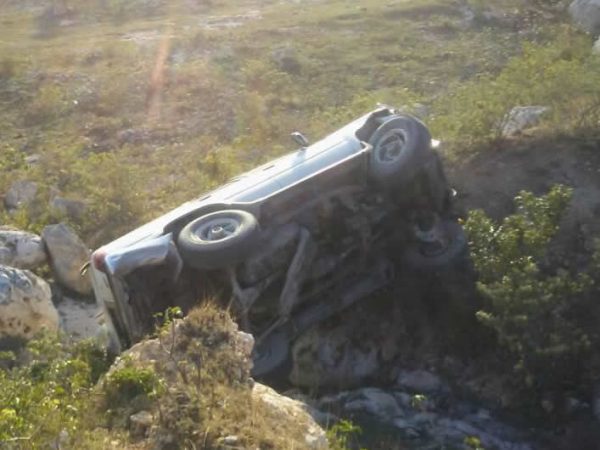 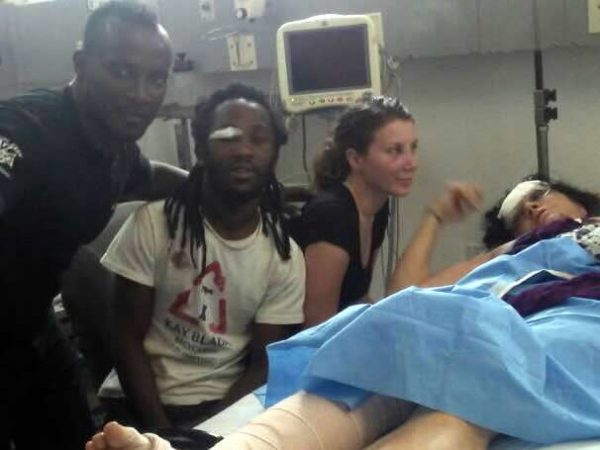 Annie’s injuries were much more serious than the broken leg and 4-inch gouge on her face.  It turned out in addition to a fractured femur, she also had fractured her sternum, lumbar vertebra 3 top and bottom, and a rib. She was able to call her husband, who contacted the Plastic Ocean Project, which arranged an immediate evacuation of the team via Air Mobile Ministries.  You can read more about the rescue on the blog of Joe, the pilot who received the call at 1:30 am on Monday and came to the rescue (Scroll almost to the bottom of the page to March 4). 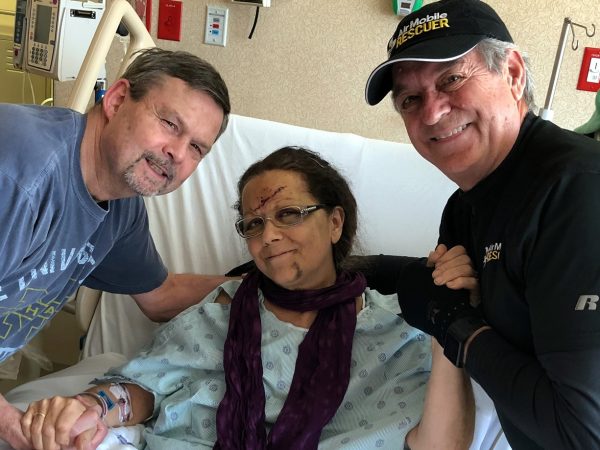 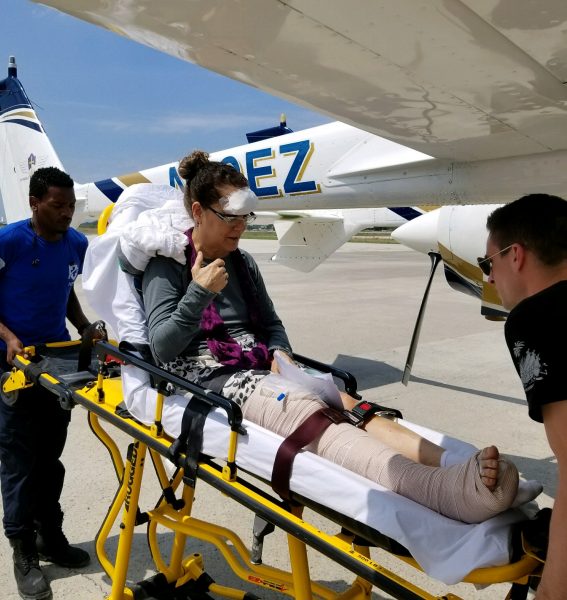 Annie is now back at home in Incline Village recovering from her ordeal.  About her attackers, she says:

I would like you to know that this trauma, as horrific as it was, does not spoil my feelings for the Haitian people or their need for help. It’s only desperate people who commit such acts and I have only compassion for them.

I don’t have the words to express how much I love this woman.

How You Can Help

Here are three organizations that can use your help.  All three are registered 501(c)(3) in the United States, and all donations are tax deductible.

AirMobile Ministries: The pilot, Joe Hurston, that rescued the Plastic Ocean Project team is taking donations for the widow of the driver who was killed. His NGO has set up funding for her.  To donate, click the PayPal Donate button at the bottom of the AirMobile Ministries page and type “Driver’s Widow” in the Description field, so Joe knows where to set aside the funding. Here’s an example: 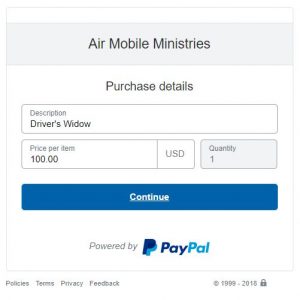 We are so grateful POP’s team survived. Any number of things could have happened: shots could have ricocheted, the car could have rolled, but instead, it went off a cliff and landed in rocks that held it in one spot. There could have been head trauma, many, many more broken bones, and lacerations. We truly are blessed in that way and of course for Joe who received our call at 1am and took action.

We understood what we were getting into. We had prepared the team on the dangers (3 of the 4 lived and worked in Haiti), but ultimately, I put them in harm’s way because I supported the mission.

To donate to the Plastic Ocean Project, click the yellow Donate button on the Plastic 2 Fuel page.  You can mention Ann Clark’s name in the Special Instructions to Seller to specify how the funds are to be used. 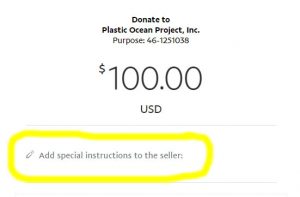